Head of Health, Sasha Stevenson is giving a lecture to the Steve Biko Centre for Bioethics at Wits University on the constitution, international human rights and Health. The lecture is part of a week-long short course on the foundation of health law offered by the university.

Education and human rights experts will meet in Abidjan, Côte d’Ivoire, for the adoption of guiding principles strengthening the right to access free quality public education in the context of growing private actor involvement in education.  Our head of the right to basic education, Faranaaz Veriava has been invited as one of those experts.

This landmark text promises to be the new reference point for governments, educators and education providers when debating the respective roles and duties of states and private actors in education. The Guiding Principles unpack existing international human rights law on the right to education and outline practical guidelines for the growing global concern about the negative human rights impacts of the increasing private actor involvement in education.

Community mobiliser Sifiso Nkala will be hosting various workshops at the uMhlathuze municipality in Richards bay. The workshops will include sessions on Sexual and reproductive health rights (SRHR), sexual violence and the National Health Act (NHA). The workshops seek to ensure capacity building and informed participation in the AIDS councils.

Spotlight co-editor Anso Thom will attend the launch of the report on the outcomes of the Presidential Health Summit held in October 2018. President Cyril Ramaphosa will launch the report at a media briefing at Tuynhuys in Cape Town. Spotlight will share the report on our websitewww.spotlightnsp.co.za and on our Facebook page.

Community mobiliser Patrick Mdletshe is attending a KwaZulu Natal civil society consultative meeting with recipients of funding from the Global Fund to fight AIDS, who will be working at a district level. This meeting aims to take attendees through the implementation of National Health Insurance.

Senior Communications Officer Ngqabutho Mpofu will be attending the Right2Know’s #LoveYourCommunityRadio campaign launch at 44 Stanley Avenue, Johannesburg. The campaign aims to “train communities, community radios and key stakeholders on the rights, capabilities, and potential of Community Radio – with the ultimate goal of making the medium more inclusive and impactful”. You can RSVP here.

SECTION27 Budget Analyst Daniel Maclaren is conducting a small group training on budget analysis to the staff at SECTION27 and the Institute for Economic justice.

SECTION27 Budget Analyst Daniel Maclaren is speaking  at a workshop on Gender Responsive Planning and Budgeting jointly hosted by SECTION27, the Foundation for Human Rights, the Studies in Poverty and Inequality Institute and the Commission for Gender Equality.

On 1 February 2019 SECTION27 welcomed a judgment granted in the Polokwane High Court in favour of Makangwane School Governing Body (SGB) represented by SECTION27.

A few weeks ago we followed up with Makangwane Secondary School learner Prince Mokoena to find out how he did in his 2018 matric exams.

You can watch the video here:  https://youtu.be/bW8ivDdwR4g

South Africa has been “on the brink” of major health system change for almost a decade. National Health Insurance (NHI) has been the buzz-phrase for  years, but somehow it is still one of the most elusive policies of our time and  it is made less tangible with each iteration of the policy. Sasha Stevenson and Nomatter Ndebele on why we are nowhere.

Make the health system, not politics a priority this SONA

Tonight when President Cyril Ramaphosa delivers his second state of the nation address (SONA) he will say very little about the actual health of the nation. Mark Heywood unpacks what the President is unlikely to address in his SONA tonight and why that is poor

Court proceedings for the matter of Rosina Komape vs The Department of Education and Others take place at the Polokwane High Court from Monday 13 November. The matter is set down from today until 1 December 2017.

Our week ahead 20 – 25 May 2019 “Empowered women, empower women” – Kasi Turpin designs   Monday 20 May SECTION27 Executive Director Umunyana Rugege, Head of Fundraising Elinor Kern and Board member Alice Brown will be participating at the Raith approved grantees governance workshops at the Raith offices.  These…

When we speak we are afraid our words will not be heard or welcomed. But when we are silent, we are still afraid. So it is better to speak. Audre Lorde, American writer, feminist, womanist, librarian, and civil rights activist 1934-1992. 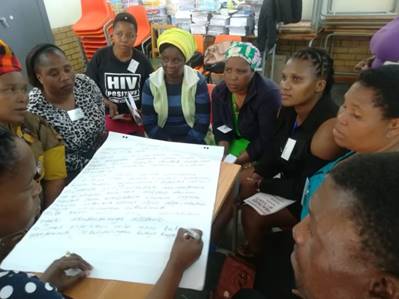