Thank you all for coming and welcome to Johannesburg.

We are joined today by over 40 activists from all parts of the world, including organisations of people living with HIV, MSF, as well as individual experts and lawyers who have fought for the rights of people to access affordable quality medicines. In this room is the residue of experience from the many successful battles that changed the landscape of the response to HIV and in doing so has prevented millions of deaths.

Some people will remember the last time we met as a group in South Africa at a seminar held by the AIDS Law Project in 2002. It is a different world we are in now:
• In South Africa in 2002 nobody was on ARV treatment in the public sector. Today over 1,7 million people in are receiving treatment through public sector hospitals and clinics;
• In 2002 vertical transmission of HIV was 30%; that figure is now 2,5%;
• In 2002 1000 people a day were dying from AIDS related illnesses, that has now halved to 500 deaths per day;
• In 2013 the SA government will award a new two-year tender for ARVs valued at R6bn ($800m).

We are glad that the meeting is taking place here in South Africa because the movement led by the Treatment Action Campaign (TAC), and supported by activists internationally, changed the face of the response to the AIDS epidemic. It put pharmaceutical companies on the defensive. It forced drastic price reductions. It encouraged a small number of governments to use the powers they hold under TRIPS (the Agreement on Trade Related Aspects of Intellectual Property Rights).

However, since those victories the stepping back of the global activist movement has given the pharmaceutical industry time to reposition. The industry looks different now. It is deliberately swallowing up its generic competitors. It is using its influence over the EU and US to advance Free Trade Agreements (FTAs) that tighten intellectual property regimes.

We have to admit that since 2005/6 TAC and SECTION27 have not been at the forefront of the access movement. That role was carried out by comrades in India, Brazil, Thailand, Indonesia and elsewhere. In South Africa we have had to address other issues that are a barrier to access to medicines, including AIDS denialism, weak public health systems and rampant corruption.

To give one example of a battle we are currently involved in. The Eastern Cape Province in SA has two government medicine depots. One is in Mthatha. The depot is severly understaffed and medicines are allegedly being routinely stolen and sold to the private sector. This means public health care facilities in the Eastern Cape are dangerously short of medicines. TAC branches in the area, together with SECTION27, are campaigning to expose the corruption at this depot and to get the Provincial and National government to intervene. It may even be something we have to litigate on.

However, despite all the other challenges we face, we believe that we cannot postpone once more addressing the issue of patents and intellectual property ‘rights’ as a barrier to access to quality medicines. We have to rejoin this battle now!

Because, we need better medicines for HIV and TB. We need more medicines and we need essential medicines, not just for HIV and TB, but also for cancer and other causes of illness.
But these needs – actually we should call them rights – exist in a context of a declining political commitment to fund the response to HIV, a global economic crisis and a drying-up of donor funding.
So what do we need? We have to define an agenda – our shopping list of the rights we intend to enforce against specific medicines. Looking at South Africa, we can identify the following needs:

MSF estimates that after 5 years 12.2% of Khayelitsha’s HIV patients on treatment had to be switched to a second line regimen because of virological failure. The demand is clearly growing and by some estimates 500 000 to a million patients will need second line treatment by the end of 2012.

The current price of our second line regimen of zidovudine , lamivudine and lopinovir/ritonavir is R4,726.39 per patient per year in the public sector. For patients that need to be switched to third line treatment, regimens are far more expensive and still not provided through the public sector. A 3rd line regimen of raltegravir, etravirine and darunavir/ritonavir costs R21,669.96 (ex VAT) per patient per year in the private sector – and this called a discount!

Additionally newer and better, 1st and 2nd line ARVs are not being provided to South African patients because of their high prices.

Unlike in the early 2000s we also have to look at TB drugs. For example, Linezolid is one the key drugs for drug resistant. But it is not widely accessible because of its price. It is manufactured by Pfizer which has a patent until 2014. But they have already made attempts to extend the patent for another formulation of the same drug and through a patent which will expire only in 2022!
This drug must be taken once a day for six months. Currently the Government pays R272 per tablet per patient. In the private sector and for NGO’s such as MSF, the price per tablet is R650. Generic versions of Linezolid in are already available in India, varying in price between R8 – R12 per tablet.

TAC, MSF and SECTION27 have begun discussing a campaign around the patent and price of Linezolid for 2013. We will announce details of this campaign soon.

In South Africa over 100,000 people die a year of cancer. Most of these people are black, poor and women. The demographics of the disease are largely the same as HIV, and of course various cancers are related to HIV. Although there are NGOs working on cancer in SA they have not fought on the issue of the price of medicines, neither have they mobilised the community of poor people with cancer. This must change and it is something we are committed to addressing. For example, in the table below all of the cancer medicines listed are under patent in South Africa, while generic versions are available in other countries, particularly India. A comparison of the prices of brand name or branded generics licensed by the patent holder with the cost of generics in India can be found here

We think this table speaks for itself!

This holding of this meeting arises from a dispute and disagreement within civil society and the activist movement over the first batch of voluntary licenses signed by the Medicines Patent Pool (MPP) with Gilead. But the purpose of the meeting is not to look back, but to look forward and learn lessons from the Gilead issue.

Our intended outcome is “a document outlining key principles and objectives of access maximising licensing terms that would serve as a yard stick for civil society and others in assessing voluntary licenses negotiated by the MPP.” If we can agree on the terms of such a document we will have an instrument with which we can measure the license currently being negotiated by the MPP with Bristol Meyers Squibb (BMS). We will also be able to make our demands and terms known to other pharmaceutical companies.

Therefore TAC and SECTION27’s appeal to participants over the next two days is that we remember that we have come to Johannesburg to save lives by improving access to medicines in every country of the world, and with a particular focus on people who are marginalised and routinely denied access. Let us:
• Be principled about the right to health care but pragmatic about strategies and tactics;
• Recognise that MPP is not a panacea for the problem of access, but that it is an important front for civil society to pursue its demands;
• Understand that the people who negotiate licenses at the MPP have no independent power if we don’t build strong national movements for treatment access that demand that the MPP is taken seriously by pharmaceutical companies;
• Above all, to know that millions of lives potentially hinge on the next two days of discussions.

SECTION27 and the Treatment Action Campaign welcome the announcement of a Special Investigations Unit (SIU) probe into contracts that the Free State and North West health departments entered into with Buthelezi EMS, a controversial private ambulance company. Proclamation 42 of 2019 published in the Government Gazette on 12 July 2019… 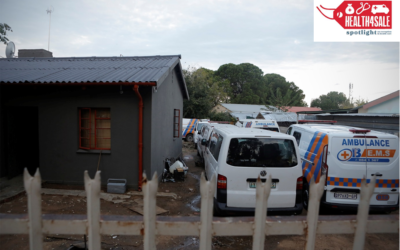 Johannesburg 25 February 2019: SECTION27 and Corruption Watch welcome the establishment of the Special Investigative Unit (SIU) Tribunal and the appointment of senior Judges to oversee this crucial task. This is an important and ground breaking development led by President Cyril Ramaphosa which demonstrates the government’s commitment to addressing corruption…