Here we detail the tragic history and outcomes of the Life Esidimeni case. Thanks to the cruel and inhumane decisions of the Gauteng Department of Health, 144 patients with mental health problems died in undignified conditions. Over 1,400 surviving patients were exposed to torture, trauma and severe violations of their human rights. The whereabouts of 44 of the mental healthcare users transferred from Life Esidimeni remain uncertain to this day.
Warning: This page contains descriptions of gross human rights violations.

In October 2015, then MEC for Health in Gauteng Qedani Mahlangu announced the end of a contract between the Gauteng Department of Health (GDOH) and Life Esidimeni – a long-term psychiatric care hospital, which provided highly-specialised chronic care to approximately 2000 mental health care users. The GDOH planned to move these mental health care users to NGOs and other psychiatric hospitals in an attempt to ‘deinstitutionalise’ mental healthcare and to save costs.

But from the beginning, civil society was concerned about the safety, health and dignity of the mental healthcare users that would be transferred. In June 2015, the South African Society of Psychiatrists (SASOP) wrote to the MEC detailing serious risks about the premature cancellation of the agreement with Life Esidimeni facilities. However, the GDOH ignored these warnings and went ahead, without consulting the families of mental healthcare users or following due procedure. In November of that year, the South African Depression and Anxiety Group (SADAG), SASOP, the SA Federation for Mental Health (SA Fed), and families of Life Esidimeni residents met with the Department, asking it to slow down and follow fair processes to ensure comprehensive care for their loved ones. SECTION27 began representing the families of mental healthcare patients and the patient advocacy organisations then and have continued to work alongside family members since that time.

Despite settling the litigation that we launched on behalf of the families and patient groups, requiring that the GDOH provide a safe plan for the transfer, the authorities failed to comply with the agreement or consult with stakeholders meaningfully, and instead pressed on. Three times, we marched with family members of mental healthcare users to the Department to protest the transfer of patients. No plan ever emerged. Information provided by the department was woefully inadequate.

The transfer to NGOs

On 18 Feb 2016, the GDOH extended the contract with Life Esidimeni for another three months but stated that all mental healthcare users would be transferred out of the facilities by the end of June that year. Between March and August 2016, mental health care users with varying diagnoses and needs were discharged from Life Esidimeni and transferred to NGOs and hospitals around the province. The process was completely haphazard, with patients being loaded onto the back of trucks, confidential patient records being lost and chaos characterising the process.

In August 2016, Christine Nxumalo discovered that her sister Virginia had passed away after being transferred without her knowledge to Precious Angels NGO. After learning that a further 8 other patients had died at the same NGO, Christine demanded an inquest into her sister’s death.

Mental healthcare users were tortured, abused, punished and in some cases deprived of food, water and adequate shelter and sanitation at the (often overcrowded) unlicensed NGOs. Mental healthcare users were not provided with the medicine or treatments that they needed for their mental health. In dire and squalid conditions, many developed dehydration, secondary infections like pneumonia or had uncontrolled seizures. NGOs were not staffed with trained healthcare professionals, lacked appropriate medicine and equipment, and in some case even basic infrastructure like beds, bedding and sanitation.

Against all expert advice, and contrary to their constitutional obligations, the GDOH went ahead with a plan that resulted in the deaths, trauma and torture of some of the most vulnerable members of society.

By September, the MEC, in answering parliamentary questions, said that 36 former residents of Life Esidimeni had died since the transfer out of the facility. Evidence later showed that at the time, more than double that number of patients had passed away because of the rushed and inhuman move from Life Esidimeni to other NGOs. By 15 September the Health Ombud Prof. Malegapuru Makgoba was requested by the Minister of Health to investigate the deaths of patients, and then on 16 September 2016, family members asked the police to launch inquests into all of the deaths of deceased mental healthcare users. SECTION27 provided relevant evidence to the Ombud and the police.

The Health Ombud investigated the transfer of patients in more detail, and invited the MEC to make submissions on their report, which they only did after some delay. The Ombud’s report entitled: ‘NO GUNS: 94+ SILENT DEATHS AND STILL COUNTING’ – which you can read here – was published on 1 February 2017. It detailed the 94 known deaths of mental healthcare users and inhumane treatment of others, stating that:

‘There is prima facie evidence, that certain officials and certain NGOs and some activities within the Gauteng Marathon Project violated the Constitution … [and] have shown a total disregard of the rights of the patients and their families, including but not limited to the Right to Human dignity; Right to life; Right to freedom and security of person; Right to privacy, Right to protection from an environment that is not harmful to their health or well-being, Right to access to quality health care services, sufficient food and water and Right to an administrative action that is lawful, reasonable and procedurally fair.’

Several deceased had died from illnesses that questioned the conditions/circumstances under which and the quality of care patients received at NGOs e.g. fits, dehydration, aspiration pneumonia, acquired pneumonia, cardiac arrest, ‘being found dead in the morning without night observations’ etc. (Ombud, Expert Panel and MAC); So in short, nothing could be that simply ‘natural’; the conditions and circumstances at NGOs made these deaths other than ‘natural’

A month after the publication of the Ombud’s report, the GDOH began moving surviving mental healthcare users from the unlicensed NGOs to safer facilities. We gathered evidence on behalf of the families and delivered it to SAPS, calling for officials involved to be prosecuted, and unlawful burials be investigated further.

In June 2017, in line with recommendations made by the Ombud’s report, former Deputy Chief Justice Dikgang Moseneke was appointed to arbitrate an Alternative Dispute Resolution between the government and the families of the Life Esidimeni deceased (legally represented by SECTION27) and survivors (represented by Legal Aid South Africa). The arbitration began on 9 October 2017. Originally estimated to take three days, the arbitration spanned 45 days, with 60 witnesses testifying and two days’ worth of legal arguments brought before the arbitrator. Of the 60 witnesses, 12 were senior government officials including the Minister of Health, the Gauteng Premier, the Members of the Executive Council for Finance, Health and the former Health MEC Qedani Mahlangu, whose fingerprints were found to be “peppered” all over the Life Esidimeni tragedy.

Justice Moseneke read out a searing indictment of the government on 19 March 2018, where he ordered that the state pay various costs and damages to the families of deceased mental healthcare users. Pulling no punches, Justice Moseneke condemned senior state officials for the “wanton, arbitrary and unaccounted decision” to discharge patients from Life Esidimeni into the care of unlicensed NGOS – a decision which “caused so much pain and suffering, stress, trauma and morbidity, and in [his] view, is a very serious breach of the constitutional obligations by the State and its servants”.

In terms of common law damages, DCJ Moseneke ordered the state to:

But the arbitration award went beyond common law damages orders alone. Justice Moseneke also ordered the state to pay R1 million in constitutional damages to each claimant for the gross violation of various rights enshrined in the Constitution, including the rights to life, dignity, equality, freedom and security of the person from torture, access to healthcare and sufficient food and water, and the rules surrounding public administration.

Justice Moseneke also found the State contravened the National Health Act, 2003 and the Mental Health Care Act, 2002 and ordered that the new MEC Dr Gwen Ramokgopa present a recovery plan to the Health Ombud and claimants within 6 months of the award and every subsequent 6 months until the recovery plan is concluded.

“This is a harrowing account of the death, torture and disappearance of utterly vulnerable mental health care users in the care of an admittedly delinquent provincial government. It is also a story of the searing and public anguish of the families of the affected mental health care users and of the collective shock and pain of many other caring people in our land and elsewhere in the world. These inhuman narratives were rehearsed before me, the Arbitrator, in arbitral proceedings I am about to describe.”

Where we stand today – in the Inquest, the Mental Health Recovery Plan and remembrance

To this day, high ranking officials in the GDOH, including Qedani Mahlangu, Dr Makgabo Manamela and Dr Barney Selebano have not been prosecuted. However, they did face disciplinary inquiries by their professional bodies, such as the Health Professions Council of South Africa.

On 18 April 2018, SAPS officially opened 46 inquest dockets into the Life Esidimeni tragedy. SECTION27 has been advised that a senior prosecutor will be leading evidence at the inquest hearing and is due to finalise arrangements with the designated judge who will be presiding at the High Court inquest. The name of the judge has yet to be made public. SECTION27 will provide evidence to the joint inquest, and hopes that those responsible for the deaths of 144 mental healthcare users and the torture and trauma of over 1,400 others are brought to justice. 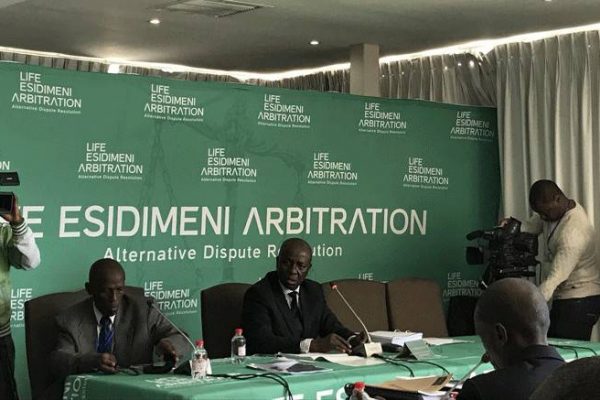 Johannesburg 25 February 2019: SECTION27 and Corruption Watch welcome the establishment of the Special Investigative Unit (SIU) Tribunal and the… Johannesburg, 18 January 2019 – We wish to express our deep concern and unease about a campaign launched by the Democractic… 7 May 2018.Posted in: Mental Health, Right to Access Healthcare

On 19 March 2018, retired Deputy Chief Justice Dikgang Moseneke read out the order in the Life Esidimeni alternative dispute resolution. In it he ordered the State to pay R180,000 in damages for emotional shock and trauma and R20,000 as part of funeral

Tags: In the newsLatest NewsLife Esidimeni Justice for the Life Esidimeni 94+

It is almost two years to the day since the termination of the contract with Life Esidimeni was announced, setting in motion a tragedy which led to the deaths of more than 100 mental health care users. Monday sees the commencement of an arbitration led by retired Deputy Chief Justice Dikgang Moseneke and designed to provide information, redress and closure to the affected mental health care users and their families.