The OHSC is a statutory body established in terms of the National Health Act to enforce quality standards across the health system became operational in April 2015. In the past, the functions of the office were carried out by a directorate within the Department of Health. It is now a functioning and independent body.

Ms Deborah Lamola of the OHSC, supported by Mr Monnatau Tlholoe and Ms Makawedi Makgopa led its submission to the panel.

The presenters acknowledged that the standard of health delivery, particularly in the public sector, is unacceptable. The adoption of quality norms and standards is intended to lead to the improvement of quality at all health facilities and to standardise practices to some extent. It was emphasised that at its core, the policy must enable a culture of responsiveness to the needs of users. Ms Lamola stated that this is clearly underpinned by the constitutional obligations of the National Department of Health in terms of section 27 to take reasonable legislative and other measures to progressively realise the right to have access to health care services and that the delivery of health services must reflect the values of the Constitution.

OHSC’s work also anticipates the introduction of the National Health Insurance (NHI) and aims to promote quality of care so that when the NHI is implemented, the health services meet the required standard. Compliance with the standards will be a prerequisite for eligibility for NHI funding in the future.

Its primary function is to certify the compliance of health facilities with the quality standards on the basis of inspections conducted by OHSC inspectors. Certificates are valid for a period of four years. However, if complaints are received, further inspection will take place and enforcement action taken if facilities are found to be non-compliant in any respect.

The enforcement function is intended to protect users from harm. In principle, enforcement should be progressive, and entails several progressively harsh penalties. A warning may be issued for non-compliance, followed by a request for a written response; recommendations to the relevant authority to take action; revocation of the certificate of compliance; and finally a request to the Minister to close the whole or part of a health establishment. The OHSC is also empowered to impose fines in certain circumstances. The penalties will also depend on the nature of the breach and risk to public and/or to health professionals. The National Health Act provides for criminal offences for the non-compliance with sections of the Act. In such cases, the OHSC may refer matters to the National Prosecuting Authority for prosecution.

The OHSC representatives advised the Panel that the regulations setting out the norms and standards and the procedure for compliance, have not yet been signed by the Minister of Health and are therefore not enforceable. This raises difficulties for the OHSC’s ability to conduct compliance activities in the private sector. A story was related concerning Netcare Hospital Group’s response to a request from the OHSC, essentially indicating the norms and standards have not been prescribed by law and that therefore the OHSC had no jurisdiction over its hospitals.

Efficiency and capacity of the OHSC

Dr Bhengu opened the question and answer session by asking whether the OHSC would not be more effective if it intervened at an earlier stage. For example, at the design, construction or licencing phase. Mr Tlholoe explained that a number of other regulators are involved at those stages, for example, infrastructure authorities impose standards for the construction of hospitals. The OHSC endeavours to collaborate with all the relevant regulators. However, Mr Tlholoe also stated that many of the OHSC’s processes are new and improving as they go along.

Professor Fonn commended the OHSC for its thorough and considered approach to setting the standards and the enforcement mechanisms. She noted that a key concern for the Inquiry is the ability of regulators to meet their statutory duties adequately. She said that as a new regulator, ‘we want to see you succeed’. She asked very simply whether the OHSC has the capacity to meet its statutory duties and functions. The representatives hesitated to give a straight answer but stated that the OHSC has approximately 35 inspectors and that the budget was established around the expectations of what the OHSC could do at this stage.

Dr Nkonki raised a common theme in these public hearings, the role of empowering the public with information about the quality of services at facilities. She asked whether the OHSC plans to assist the public to understand the quality of health outcomes in a given facility so that members of the public can compare facilities on the basis of quality. Mr Tlholoe referred to the OHSC’s collaboration with civil society, in particular, the Eastern Cape Health Crisis Action Coalition, which is a coalition of civil society organisations, labour and others. The OHSC is currently engaging with the coalition on a memorandum of understanding to enable a close working relationship in which the communities will play a role in monitoring their health facilities. Dr van Gent stepped in to say that publishing such quality information, which must be verified and processed, is highly technical and poses a number of difficulties, as demonstrated in the Netherlands and the United Kingdom.

Chief Justice Ngcobo asked how the Ombud is distinct from the OHSC. The OHSC representatives had some difficulty answering the question. It appears that the Ombud’s office has not yet been established. In terms of the National Health Act, there is significant overlap in the functions of the Ombud and the OHSC, both of which are empowered to deal with complaints from the public concerning the quality of health care services in health facilities across the country. 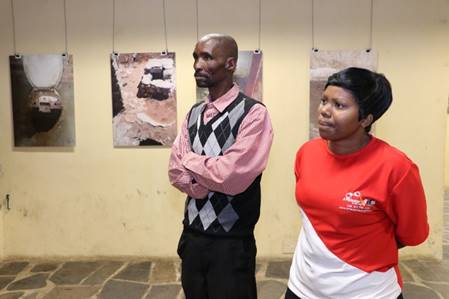