By admin, 31 May 2018 Posted in: Emergency Medical Services, News, Right to Access Healthcare

Health professionals in the Eastern Cape have raised the alarm as healthcare services in the province have been crippled by a lack of ambulances and patient transport vehicles.  Patients have reported that there is an Emergency Medical Services strike in the province.

A number of health professionals have contacted the Eastern Cape Health Crisis Action Coalition (ECHCAC) in desperation as they have been unable to transfer patients in need of urgent medical care. The Coalition is aware of an incident that resulted in the death of a patient where an ambulance was called and it did not arrive.

Some patients are forced to hire taxis at prices they cannot afford, to take them to the hospital or forfeit their hospital visit with dire long-term consequences to their health. Both health professionals and patients have spent countless hours on the phone to Emergency Medical Services call-centres only to be told that no ambulances are available.

The Coalition has written to the new MEC for Health, Helen Sauls August with a request that she investigate the lack of ambulance availability at the affected healthcare facilities.  To date, MEC Sauls August has not responded. The Coalition has been told that the Department has employed the services of private ambulances to alleviate the pressure caused by the lack of personnel. However, striking workers were not allowing the private ambulances to operate.

Other incidents reported to the coalition include:

Health professionals are becoming desperate as they must constantly work under crisis conditions to mitigate the lack of public ambulances. We appeal to those who are involved in the strike to allow ambulances transporting critical patients to operate.

ECHCAC calls on the provincial and national health departments to urgently intervene before any more lives are lost. The Coalition urges the departments to act swiftly to avoid the situation degenerating to the state which occurred in the North West Province. We urge the MEC of Health, Premier Phumulo Masualle and the Minister of Health Aaron Motsoaledi to prioritise the lives of patients and take decisive action. Dear Friends of SECTION27 What a year this has been! Our team has been busier than ever – we put together an overview to summarise our impact this year. Our offices will be closed from today, 11 December 2020 until Monday 4 January 2021. Remember our website never closes, so…

The ongoing strike at the National Health Laboratory Services (NHLS) is a disaster for critical and lifesaving laboratory services, but also the fragile stability of this institution, the struggling public health system and poor people who heavily rely on it. 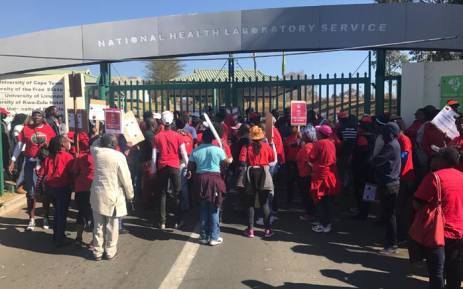