“It is not only what we do, but what we do not do, for which we are accountable.” Moliere (baptised Jean-Baptiste Poquelin)

BREAKING NEWS: On Friday 10 August, the Department of Basic Education (DBE) has applied for leave to appeal the judgement pertaining to the Regulations Relating to Minimum Norms and Standards for Public School infrastructure (The Regulations). The judgment delivered by Acting Judge Msizi on 19 July 2018 in the case of Equal Education v Minister of Basic Education found several sections of the Regulations inconsistent with the Constitution, the South African Schools Act and a 2013 court order.  The judgment accordingly declared these sections of the Regulations unlawful and invalid.  The DBE has now applied that leave be granted to the Applicants to appeal directly to the Constitutional Court of the Republic of South Africa against the whole of the Judgment and Order granted by the High Court of the Republic of South Africa, Eastern Cape Local Division, Bhisho (the Court a quo). Head of Health, Sasha Stevenson will be participating in a discussion entitled “The Emotional Toll of Social Justice Work”. The discussion is arranged by the Wits Institute for Social and Economic Research (WiSER). In partnership with SECTION27, the Wits School of Law and Students for Law and Social Justice will discuss the impact of working on the Life Esidimeni case as a way to discuss the challenge of sustaining practice in the professions of law and medicine. Further details can be found here: https://wiser.wits.ac.za/event/emotional-toll-social-justice-work-medicine-and-law­­­­­­­­­

Head of Health, Sasha Stevenson, Head of Fundraising, Elinor Kern, and M&E specialist Gill Lewin will be meeting with the Treatment Action Campaign, AIDS Foundation of South Africa, and the Swedish International Development Agency (Sida) to discuss the joint programme:  “Using the Sustainable Development Goals as a catalyst to make Sexual and Reproductive Health Rights Real in Eastern and Southern Africa”.

From 14 to 16 August, Community Mobiliser, Patrick Mdletshe will be conducting SECTION27’s Train-the-Trainer sexual violence workshops in KwaZulu-Natal. The training sessions will be attended by Treatment Action Campaign branch educators and partner organisations who work with schools around sexual violence issues.

Attorney Samantha Brener and Senior Researcher Thabang Pooe will attend the launch of the Sanitation Appropriate for Education (SAFE) campaign on 14 August 2018 during a special breakfast event to be hosted by President Cyril Ramaphosa.  The invitation states that the aim of the SAFE is to mobilise Department of Basic Education strategic partners – the private sector and South African citizens – to join hands in setting up an initiative that will accelerate the eradication of inappropriate sanitation facilities in our schools thereby fast-tracking the restoration of dignity and pride among our learners, schools and the communities surrounding them. SECTION27 will comment on this initiative once we have all the facts.

Several SECTION27 staff members will attend the Daily Maverick The Gathering: Media Edition in Cape Town. Tickets are still available https://dmgathering.co.za/. A highlight will be a pre-recorded interview with the #Guptaleaks whistle-blowers.

Members of the SECTION27 team will attend a webinar organised by the Treatment Action Group (TAG), The Global Tuberculosis Community Advisory Board (TB CAB), and DR-TB Scale-Up Treatment Action Team (DR-TB STAT) on implementing a bedaquiline-based, injectable-free regimen for drug-resistant tuberculosis (DR-TB) in light of the new WHO policy brief on DR-TB regimens.

Daniel McLaren will be attending Realising Socio-Economic Rights in a time of Austerity, a launch of two publications by Studies in Poverty and Inequality Institute in Johannesburg.

Members of the education team will meet with a team from Amnesty International which is undertaking research on the state of education in South Africa. The meeting will discuss some aspects of the research relating to community outreach. 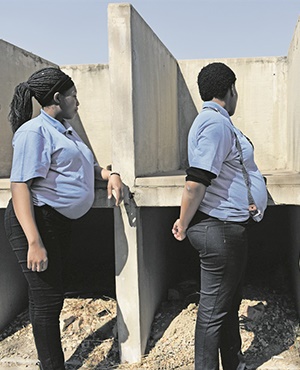 In the City Press on 12 August, Thabang Pooe discusses the need for comprehensive sexual education in our schools.

“The 2017 General Household Survey by Stats SA stated that an estimated 15 740 learners fell pregnant in the previous year – that’s roughly 43 every day. These numbers are monitored from as early as Grade 3.”

Executive Director Mark Heywood will speak at this year’s Joburg Mining Indaba. Mark will speak in the session titled How do we get to the future?

In death, she has demonstrated that our many differences along political party and racial lines and the numerous disputes we may have are eclipsed by our shared desire to follow her lead in building a just, equitable and caring society.

Week ahead April 29 – May 03 “One of the penalties for refusing to participate in politics is that you end up being governed by your inferiors.” - Plato Monday April 29 Head of Education Faranaaz Veriava and other members of the Education team are attending a seminar on “Critiquing…